The Martin County Sheriff’s Office Aviation Unit operates 7 days per week, 365 days per year.  The unit is staffed by the Chief Pilot, two line pilots, three Tactical Flight Officers and a maintenance technician.  The Special Operations Lieutenant oversees the Aviation Unit, along with the Marine and K-9 Units.  The MCSO Aviation Unit currently operates four helicopters that are all outfitted with law enforcement equipment. 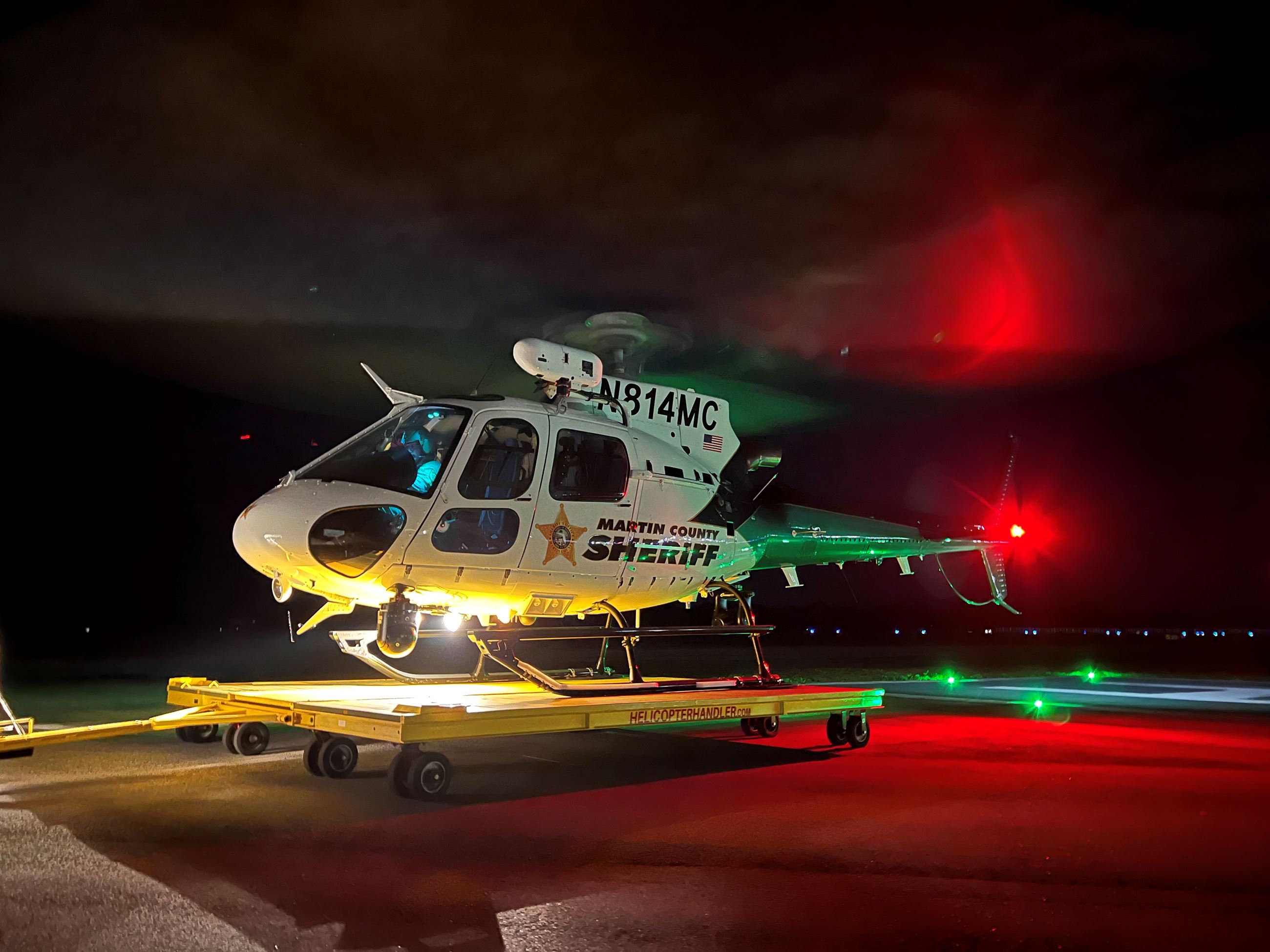 helicopters that were acquired from the military 1033 program.  All of the MCSO OH58 helicopters were manufactured between 1970 and 1972.  Due to the age of the Bell OH58 fleet, in 2020, the MCSO made the decision to begin upgrading the aircraft.  We did so with the purchase of a 2020 Airbus H-125 helicopter.  The H-125 not only adds a modern age aircraft with state of the art law enforcement equipment, advanced avionics and enhanced safety features, it also expands the MCSO Aviation Units capabilities by giving us the ability to conduct fire suppression with the use of a Bambi bucket during wild fire season, hoist capability and SWAT insertion capability.  Furthermore, with a modern helicopter comes new age component technology.  Many of the aircraft components to include rotor blades, engine and transmission have a much higher time before overhaul / retirement times, thus reducing some maintenance costs.

The primary duty of the pilot is the safe operation of the aircraft during all phases of flight.  All MCSO Aviation Unit Pilots must possess an FAA Commercial Rotorcraft certificate with Instrument endorsement as well as a class 2 FAA medical.  Two of the Aviation Unit pilots are also Certified Flight Instructors.  All pilots must conduct yearly emergency procedures training in both the H-125 and OH58 helicopters.  This training consists of however is not limited to touchdown auto rotations, simulated tail rotor failures, hydraulics failures.  Emergency procedures training is conducted both during daylight and at night under Night Vision Goggles (NVG).  All pilots must maintain their flight standards to the FAA Commercial Practical Test Standards.

What we do and how we do it

The aviation unit serves as a command and control platform for a variety of missions.  Past studies have shown that one helicopter can take the place of 10 patrol deputies during incidents requiring perimeters, suspect and missing person searches.

The MCSO aviation unit regularly conducts directed patrols of the county in an effort to be proactive and find crime in progress such as burglaries to vehicles, boats and storage yards.  Furthermore, while conducting proactive flights, the helicopter is already airborne in the event an incident takes place such as a vehicle pursuit, burglary, robbery etc.  This greatly reduces the response time, and the helicopter is often first on scene.  The helicopter is used during searches for suspects, missing persons, missing boaters, warrant apprehensions, surveillance, high risk search warrant execution, high risk suspect apprehensions and directed patrols.

The Aviation Unit supports a variety of local, state and federal agencies. Flight missions include:

The air units often patrol vast tracks of land in western Martin County that are not easily accessible by ground patrol vehicles. The ability of the Aviation Unit to be the Uniform Patrol Watch Commander's eye in the sky is invaluable for law enforcement ground operations

Complaints or concerns regarding any aircraft

The Martin County Sheriff’s Office does not investigate complaints against aircraft or pilots flying in the National Airspace System (NAS).  The Federal Aviation Administration will accept reports concerning the safety of the NAS, violation of a Federal Aviation Regulation (Title 14CFR), aviation safety issues, and reports related to FAA employees or FAA facilities.

If you have a complaint or concern, you may contact the FAA via email address: faa-air21@faa.gov  or by filling out the report form that is found at https://hotline.faa.gov  Please note this hotline is not intended to be used for general questions or comments.  If you do have a general question regarding aircraft, you may contact the Martin County Sheriff’s Office Aviation Unit at 772-220-7097.

Laser strikes on aircraft remain a serious threat to aviation safety.  Intentionally aiming lasers at aircraft poses a safety threat to pilots and violates federal law.  Many high-powered lasers can incapacitate pilots flying aircraft that may be carrying hundreds of passengers.

Whether you're a novice drone pilot or have many years of aviation experience, rules and safety tips exist to help you fly safely in the National Airspace System (NAS). Learn more about the types of drones, where to safely fly and more by visiting https://www.faa.gov/uas/getting_started/

Register your Drone with the FAA. Click here - https://faadronezone.faa.gov/#/